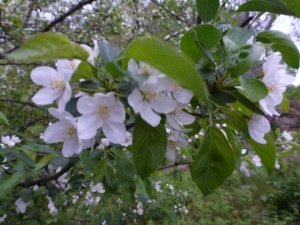 During my second week on the farm, I’ve really begun to settle in in my body and mind. Both were a little weary after a half week of farm work, especially because I am absorbing so much all at once, but this past week was filled with accomplishment and excitement. After barn chores on Monday, we went over our weekly schedule for May and, in less detail, our schedule for the rest of the season. Once we begin harvesting in June and the patterns on the farm shift away from planting, the schedule will become more regular. For the time being, most all tasks and projects are weather-dependent and therefore adhering to a schedule is nearly impossible. Nevertheless, I got the sense that the four interns will be rotating through different tasks weekly or biweekly so that we each get a feel for everything from harvesting to bringing produce to market to monitoring the farm stand to driving the horses, and so on. After discussing scheduling, we walked throughout the farm to check on the condition of each field after several days of steady rain.

As we were walking, we talked about how the fields are laid out in terms of successional plantings. For a CSA in particular, but really for any market, farmers need to plan out the fields spatially and temporally. There are lots of crops that will be done mid-season, which leaves both an empty space in the field and in the market. In the strawberry patch, there are early, mid, and late-season varieties so that they can sell berries throughout the summer. For plants that produce a one-time harvest like broccoli, we will be seeding every 10 days so that there is a harvest of broccoli roughly every 10 days. Succession is an important factor at the end of the season as well; winter starts so early here that most winter cover crops need to be in the ground by the beginning of September, so Ken and Adrienne need to plan to harvest everything out of certain fields by the end of August. A cover crop like oats and peas, which will winterkill, can be seeded a bit later, but cover crops like rye and vetch need to be seeded early enough for the plants to establish so that they can survive the winter and continue growing in the spring. For crops like tomatoes, which fruit many times from the same plant, we will only plant them once, but succession comes into play from year to year. If a field is in tomatoes continually, after a few years the disease pressure will be too heavy and require a lot of spraying, so they must be rotated through different fields.

One of the big accomplishments of the week has been disassembling and relocating the hoophouse for that very purpose. The hoophouse (moveable greenhouse, see below) has been in tomatoes for a few seasons now, and hasn’t been moved, so we moved it to a field about 200 feet away. I assume this project would have taken far less time in drier conditions, but it took 5 people about 8 hours total. The hoophouse is comprised of a wooden door frame at either end, 2”x6” boards along the long edges, held to the ground with rebar and semicircles of metal pipes all along the length of it (held up like arches by the rebar). There is a giant piece of plastic stretched across the frame that is held down by parachute cord strung across it in a shoelace pattern and fastened down by tying it onto screws. Underneath the 2”x6”s, we stapled down a long strip of landscape fabric to keep the quack grass from encroaching. As we were sawing off pieces of wood to hold the plastic onto the door frame and sloshing through the mud to locate screws, staples, measuring tape, and an impact driver, Adrienne told me, “To be a farmer, you have to learn about 5 other trades as well.” I could now see that this includes construction, engineering, marketing, accounting, mechanics, and plumbing, to name a few.

hoophouse (with the sides opened)

Monday afternoon, it was still too wet for planting, so Graham and I went into the greenhouse and he made soil blocks while I seeded winter squash. I seeded many different varieties of kabocha, delicata, blue hubbard, pie pumpkins, and acorn squash, totally about 1500+ plants. It’s been magical to see how fast the seedlings grow from germinating with one little stem and 2 little cotyledons into strong, colorful plants of many shapes and sizes.

a tray of finished soil blocks 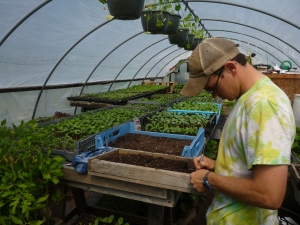 Tuesday evening, the four interns went to a MOFGA (Maine Organic Farmers and Gardeners Association) intern gathering at Ararat Farm in Lincolnville, ME. The farmers there are hired by the farm owners (rich retirees) to manage the property, and they sell the majority of their produce wholesale to grocers. The entire farm seemed very clean, neat, and in good repair, as well as having quite a bit of new-looking infrastructure. It was a great example of what a difference deep pockets can make. After the tour, we had a potluck and shared beginning-of-the-season stories with other Central Maine MOFGA interns.

On Wednesday, the sheep were moved out of the barn for the summer, which required many preparatory tasks. Since last Friday, Ken had been shearing ewes at a rate of about 4 per day and had finished by Tuesday. Wednesday morning, Ken, Graham, and Brian were confined to the barn for several hours to finish trimming the wool, to trim the dreaded mats of their tails, and to clip their nails. This meant holding a sheep in place on its back while another person trims or clips, and many of them struggle and escape. The shearing and trimming is for the heat, while the nail clipping is so that they can walk more freely without their long, bending nails under their hooves. Once that was finished, we set up a fence chute leading to the new pasture in such a way that they had to run through a pan (a salvaged sap pan from an old sugar house) full of water mixed with hydrogen peroxide. Shepherds that don’t do this from time to time often see a higher rate of hoof rot. It took all 6 of us and a pinch of luck to herd the whole flock through the chute without a breakout.

The next big project we got through this week was strawberry planting. Wednesday through Friday, we planted 1800 strawberry plants in Field 2, which is up on a slope next to a big horse pasture filled with dandelions and overlooking a beautiful forest. The berry plants all arrived from Nourse Farms as sad-looking little things that were about 90% root and a few stubbles of stem. It’s amazing to think that these plants are hardy enough to ship from Massachusetts in a near-death condition, sit in the basement for a month, and then come to life as soon as they get some soil and sun. We planted 2 early season varieties, AC Wendy and Earliglow, 2 early-mid season varieties, Cavendish and Honeoye, and 2 mid season varieties, Jewel and Rubicon (all of which are described on Nourse Farm’s website). Of the 1800 plants, 1000 were Jewel, and there are still 600 plants waiting to get in the ground. Strawberries are planted in spring and then their flowers are plucked in the first year to encourage vegetative growth until the first harvest in the following year. There is a patch of strawberries in field 3 that was planted last spring and will have its first harvest this summer, and the patch we just planted won’t be harvested until next summer. Adrienne explained that although wild strawberries are perennial, cultivated strawberries are not true perennials. After 2 years of harvest, their yield diminishes so severely that nearly all organic commercial growers plow their patch under and buy new plants for a different field. Conventional (non-organic) growers continue to add fertilizers to artificially feed their berries even after the soil has been depleted, but organic growers must rotate their crops. The only other option for organic growers is letting the runners root in the aisles and plowing under the original rows, essentially switching the aisles and the rows. This would make the beds difficult to access for weeding and harvesting while the runners are in the aisles, and might not increase fertility very much because it would only be a 2-crop rotation. I asked Adrienne what she thought of transplanting all the berries to a new field rather than buying new ones, and she said that would work but it would take too long and would be ultimately inefficient. This makes me wonder if there is a way to produce strawberries commercially that lets them be truly perennial and still productive. In my research, it seems that this is nearly impossible at a commercial scale. I also found that pest pressure is lessened on strawberries on very diverse farms (farms that grow many different crops) as opposed to similarly managed monoculture operations. I want to research further how berries are grown in polycultures and think about how those models might be applicable to a market garden or a small farm.

This week, we also talked a lot about pricing and marketing, we had our first draft training, and we were introduced to direct seeding in the field. We’ll go a lot deeper into all of these topics in the future, so I will leave them for later.

an interesting read about strawberry pests: