hanging out with Freya after work

Quite an eventful week: We gained a new WWOOFer (volunteer farm labor) but lost one as well, We planted potatoes and leeks, a few chickens died, the cows went out to pasture, we had our big plant sale, I went to market in Norwich, we seeded a whole bunch of storage crops, and we had a school group come visit.

When I got back from Hampshire commencement and visiting cousins Sunday night, another WWOOFer had arrived. Sarah is from Norwich, VT, where our Saturday market is. She just finished her first year at Brandeis and she will be with us the whole summer! On Thursday, we said goodbye to Christie (from Australia), and learned that we won’t get a new WWOOFer until the second week of June.

On Tuesday, Brian and I spent a few hours sorting out about 10 varieties of seed potatoes and cutting the largest ones in half. Many of them had heartrot (holes in the center) and a few varieties had black centers. The heartrot are okay to plant because the problem is physiological, but the black centers are a bacterial disease so they must be kept out of the rest. We planted those out in ditches in the upper field, plopping them down in the ground 6 inches apart.

Later in the week we planted 2,430 rowfeet of leeks, Tadorna for storage and Lancelot and Megaton for fall harvest.

view of the upper field from a hill; the white rectangle is the cow barn

On Wednesday a group of 30 4th graders came to the farm for the morning, which was exciting but also exhausting. Suzanne put Natalie (WWOOFer from Philly) and me in charge of them for part of their activities. Broken into 3 groups of 10 each with 3 adults, each group would go on a tour of the animals with Suzanne, talk about energy with one of their teachers (who was an apprentice at Luna Bleu), and then come to me and Natalie to get their hands in the dirt. We started them off transplanting basil, lettuces, and flowers from mini soil blocks into larger ones. Many of them were quite careful and diligent, to our surprise! Next, we walked up to the upper field and had them planting potatoes, with one kid using their hands to measure the spacing and one laying them down. Finally, we asked them to count the onions, broken into pairs each with a mini clipboard made of cardboard and a clothespin. We gave them math problems such as, “If you counted 456 Gold Coin onions in this bed, and there are 4 rows in the bed, how many total?” “Now- there are actually 3 onions per cluster… new total?” “Last challenge: if there are 7 beds of onions and each one is 360 ft long, how many bed feet of onions are there?” They had such a wide range of math competency levels among them, and used different techniques than I was taught for multiplication, but in the end, it was fun and exciting for them. None of the numbers were at all accurate. 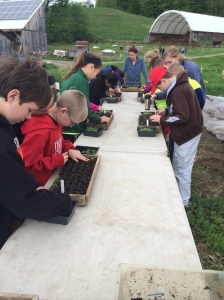 On Wednesday afternoon, we found 5 dead Freedom Rangers, one quite mutilated, one headless, and the others just injured. It was likely a fox…the dogs had been barking a lot the night before. Later in the week we found two more dead, possibly from choking. There were also four layer chicks that died overnight during a frost, not from the cold directly but from being at the bottom of a chicken pile while they gathered together for warmth. 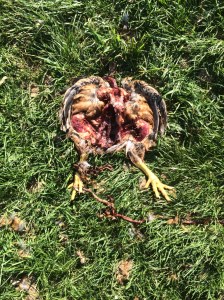 part of a chicken 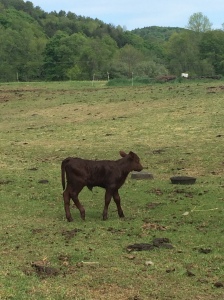 On Wednesday and Thursday, we took 2 groups of cows up the hill a bit to pasture for the summer, and the hills they are on are beautiful. From that elevation everything seems so lush green and peaceful.

I went to market Saturday with Suzanne, Natalie, Sarah, and Christina (farm helper who comes 2 days/wk). It’s a big, wealthy market with permanent wooden stalls that are quite big and well built. Their are a few other vegetable growers at the market, lots of meat and eggs, potted plants, pickles, yogurt, bread and pastries, prepared food, specialty items like birch syrup and foraged foods, and lots of crafty expensive things like stained glass and pottery. We brought spinach, salad greens, broccolini, storage onions, eggs, meat, and plants for sale. We had easily over 2000 tomatoes, peppers, and eggplants in 4.5inch pots, plus a few gallon pots of tomatoes and some small plugs with onions, squash, zucchini, cucumbers, basil, and parsley plants. With two cashiers at once, there were still constant lines and the flow of customers was continuous for the 3+ hours of market. I was so glad to have had previous sales experience at a farmers market and I imagine starting with a market like this would be overwhelming.

Back at the farm, Brian, Shona (Tim & Suzanne’s daughter), and Tim were staffing a sale of the remaining tomatoes, peppers, and eggplants.

Throughout the week, we seeded storage cabbage, winter squash, and another round of brassicas. We also weeded four rows of blueberries that are down past the orchard, and now look much happier.

This weekend was our fourth anniversary (!!!) so we biked into town and got burgers at this awesome place that uses tons of local ingredients and has about 20 craft beers on tap: 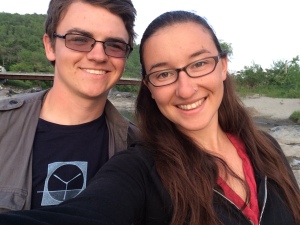 Freya cooling off in the shade

Despite a late frost (31F Thursday night) it is really starting to feel like summer. The low for tonight is 62F and we baked in the heat all day. Next bike adventure will definitely be to the river! 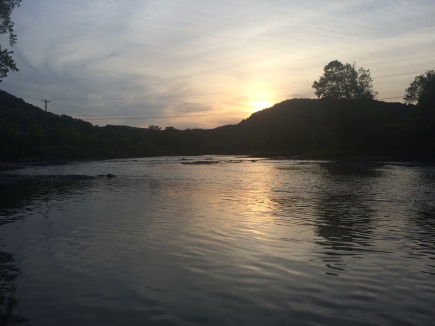 sunset on the White River